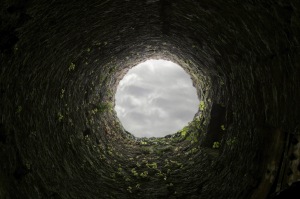 Psalm 40:1 I waited patiently for the Lord;  he inclined to me and heard my cry.  2 He drew me up from the desolate pit,﻿﻿ out of the miry bog, and set my feet upon a rock, making my steps secure.

These verses create for me a powerful mental picture. In verse 2 the writer (King David) describes a “desolate pit”. In other words, the writer had felt as though he was in a deep hole. One of my bible encyclopedias (or “commentaries”) tells me that David uses the same Hebrew phrasing as was written about Joseph in the book of Genesis when his brothers threw him in a “cistern” – left for dead. These same words were used to describe the place the prophet Jeremiah was left by his enemies to starve. These words are often used as well to describe “Sheol”, which is the realm of the dead.

The “desolate pit” is not a happy place. At all.

In a deep hole there is no light, only darkness. It’s a place of loneliness and despair, where the future looks grim.

Then there is the “miry bog”.

A miry bog is a slippery place where, no matter the direction in which you step, you’re likely to fall down. Such a place is also squishy, like quicksand. The earth swallows your feet and pulls you down as if to suffocate you. Ahhh! It’s like a bad horror movie!

Now, compound the two. Imagine standing in a “miry bog” at the bottom of a “desolate pit”. What would you do? What would I do? I’d be freaking out! I’d probably cry and wail and pray for someone to get me out of there, because in such a place there is basically no hope of getting out on your own.

Of course, the psalmist is writing this as a metaphor. I don’t expect he’s literally standing in a miry bog at the bottom of a desolate pit. Rather, he’s in a really tough place in life with no hope apart from God.

Some of you are standing in a miry bog at the bottom of a desolate pit – right now.

I’ve mentioned in this space several times that my wife Jana and I have three children, two young adult college-age kids and one high schooler. As hard as it is to be in the pit myself, it is MUCH more difficult watching my children in such a place, especially adult children. Why? Because as a parent to adult children there’s often little I can do to help. I can advise. I can support. I can respond if invited in, but often I am not – which is normal. Young adult children have to find their own way through life.

And my job is to let them do so – but MAN IS THAT HARD!

As I type this blog post I’m realizing that I’m seeing one of my kids getting free from the miry bog at the bottom of a desolate pit. This deliverance was years in the making. And, it’s not a completely done deal, but I see it happening – and I thank God for it. Which brings my attention to the first verse:

1 I waited patiently for the Lord;  he inclined to me and heard my cry.

Having just mentioned a situation that appears to be getting some resolution, there are others in which I wait. And wait. And I know that I cannot resolve these things. It is up to God to do so. What about you? Where are you waiting for the Lord? What does your “miry bog” and/or “desolate pit” look like? Or perhaps your focus is not so much on your own situation, but that of someone you love – which may, frankly, be worse. If you find yourself crying out to God, know that you are not alone.

And know that God hears your cries/prayers/pleadings.

Heavenly Father, by your great mercy, save us and those we love from the miry bog at the bottom of the desolate pit. Amen.

One thought on “The Desolate Pit…”