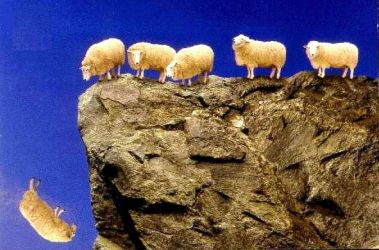 Scripture: Joshua 9:3 But when the inhabitants of Gibeon (within the boundaries of the Promised Land) heard what Joshua had done to Jericho and to Ai, 4 they on their part acted with cunning…6 They went to Joshua in the camp at Gilgal, and said to him and to the Israelites, “We have come from a far country; so now make a treaty with us.” 7 But the Israelites said to the Hivites, “Perhaps you live among us; then how can we make a treaty with you?” 8 They said to Joshua, “We are your servants.” And Joshua said to them, “Who are you? And where do you come from?” 9 They said to him, “Your servants have come from a very far country…14 So the leaders (of Israel) partook of their provisions, and did not ask direction from the Lord. 15 And Joshua made peace with them, guaranteeing their lives by a treaty; and the leaders of the congregation swore an oath to them.

Observation: God the Father had given specific instructions to Joshua and his people to completely destroy all the people inhabiting the Promised Land. Why? Because if they were allowed to live they would eventually develop relationships with God’s people and lead them astray with their pagan gods. V.14 says Joshua “did not ask direction from the Lord”. It would have been prudent for Joshua to consult the Lord via the prophets of Israel before making a treaty, since there was some question as to the original of these people. Had he done so, God would have revealed the truth – that they represented a people God directed to be destroyed. As it was, they were allowed to live… and became a stumbling block to God’s people.

Application: Things aren’t always what they seem. I’ve been fooled many times in life because something looked good on paper, but there was hidden information I didn’t know about until it was too late. This is what happened to Joshua. Today’s passage reminds us that we should seek the Lord when making important decisions, trusting the Lord to reveal the truth to us if we ask. But how? We can seek the Lord directly in prayer. If I pray about something and don’t have peace on the inside, something’s not right. We can invite trusted persons into the question with us to get their opinions. Others often see things I may be blind to. When hiring people, or collaborating with others, I’ve made it a point to arrange a trial period before agreeing to something long-term. Often times hidden issues come out within the first 3 months or so. These are just a few examples.

Question – what important issues are before you right now? Have you sought the Lord’s input before making a final decision?

Prayer: Gracious Lord, you always know more than we do yet we tend to want to do things on our own instead of seeking truth from you. Give us grace to invite you into matters large and small. Reveal your truth so that we might not be led astray. We ask this in Jesus’ name. Amen.