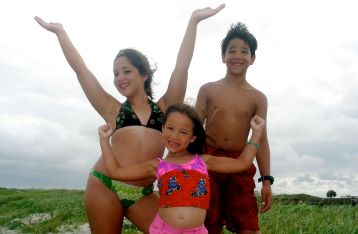 Scripture: Ezra 3:10 When the builders laid the foundation of the temple of the Lord, the priests in their vestments were stationed to praise the Lord with trumpets, and the Levites, the sons of Asaph, with cymbals, according to the directions of King David of Israel; 11 and they sang responsively, praising and giving thanks to the Lord, “For he is good, for his steadfast love endures forever toward Israel.”And all the people responded with a great shout when they praised the Lord, because the foundation of the house of the Lord was laid. 12 But many of the priests and Levites and heads of families, old people who had seen the first house on its foundations, wept with a loud voice when they saw this house, though many shouted aloud for joy, 13 so that the people could not distinguish the sound of the joyful shout from the sound of the people’s weeping, for the people shouted so loudly that the sound was heard far away.

Observation: This is such a poignant moment. After many years in exile, some of the Israelites were allowed to return to Jerusalem to rebuild the temple which had been destroyed by invaders. First they rebuilt the altar, then they laid the new foundation. Many of the returning Israelites were younger and had never seen the original temple. But the older people had – and many wept for grief of what had been lost: a beautiful temple, a mighty nation, loved-ones killed in the invasion or who died while in exile. It was bittersweet.

Application: Spring break is coming up, so I was thinking about what my family and I might do during that week. For years we might go on a trip somewhere, especially to the beach. Living down south means it can be quite warm in March. Or we would go to an amusement park somewhere or go to visit family out of town. But then I realized our family is very different than it once was – mostly because the kids are older now. They have lives of their own. They have friends they like to hang out with. They have part-time jobs. They have school obligations. It’s not as simple as it once was to pick up and do something together.

And on one hand I celebrate this because I want my children to fly the nest. But I also lament what once was. In many ways, things were simpler then. And there’s a part of me that grieves its loss today. It’s bittersweet.

Prayer: Lord Jesus, give me grace today to grieve the loss of what was, while celebrating what is and what will be. Amen.