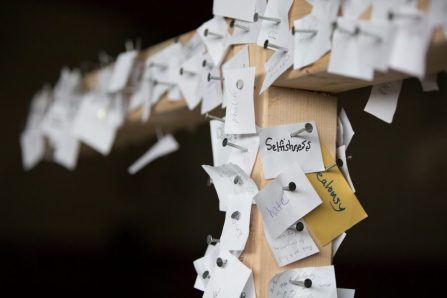 Colossians 2:12 when you were buried with (Jesus) in baptism, you were also raised with him through faith in the power of God, who raised him from the dead. 13 And when you were dead in trespasses and the uncircumcision of your flesh, God made you alive together with him, when he forgave us all our trespasses, 14 erasing the record that stood against us with its legal demands. He set this aside, nailing it to the cross. 15 He disarmed the rulers and authorities and made a public example of them, triumphing over them in it.

This morning I’m taken with the image of “the record that stood against us with its legal demands”. In the original covenant of the law of Moses, faithfulness was about keeping the rules (starting with the 10 commandments and growing from there) – which people repeatedly demonstrated they could not keep. It’s not that people didn’t try to be faithful to the law, but sin always got in the way. It was a losing battle.

I know I’ve done many things in my life that I’m not proud of. In my weaker moments I listen to the voice reminding me of my mistakes and shortcomings. It sounds something like this, “You’re no real follower of Jesus. You’re a pretender. You screw up all the time! If people knew the truth about you they would run from you. You have no right to be a Christian leader. You’re a fraud!”

I’ve learned over the years where that voice comes from. It’s the voice of the “Accuser”, which is another name for Satan. The bible tells us about this in the book of Revelation,

10 Then I heard a loud voice in heaven, proclaiming, “Now have come the salvation and the power and the kingdom of our God and the authority of his Messiah, for the accuser of our comrades has been thrown down, who accuses them day and night before our God.

The accuser likes to read back to us our record of wrongs. It feels condemning because it’s true. We have messed up. A lot. But in this passage from Colossians the apostle Paul reminds us what Jesus has done with our record of wrongs. Jesus doesn’t throw our mistakes back in our face, but has instead gone about “nailing it to the cross”. Our record is wiped clean by the blood of Jesus poured out for you and me. In fact, the bible tells us repeatedly that God doesn’t just forgive our sins, but remembers them no more!

We no longer live under the covenant of the law, but the covenant of grace in Christ Jesus. There is mercy rather than condemnation. There is the chance to be made new every day. Heavenly Father thank you for your goodness and faithfulness to us sinners. Amen.