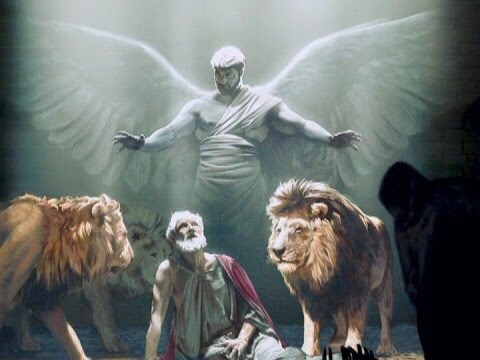 Daniel 6:19 Then, at break of day, the king got up and hurried to the den of lions. 20 When he came near the den where Daniel was, he cried out anxiously to Daniel, “O Daniel, servant of the living God, has your God whom you faithfully serve been able to deliver you from the lions?” 21 Daniel then said to the king, “O king, live forever! 22 My God sent his angel and shut the lions’ mouths so that they would not hurt me, because I was found blameless before him; and also before you, O king, I have done no wrong.” 23 Then the king was exceedingly glad and commanded that Daniel be taken up out of the den. So Daniel was taken up out of the den, and no kind of harm was found on him, because he had trusted in his God. 24 The king gave a command, and those who had accused Daniel were brought and thrown into the den of lions—they, their children, and their wives. Before they reached the bottom of the den the lions overpowered them and broke all their bones in pieces.

King Darius got trapped into punishing Daniel for not bowing down before anyone or anything but God. Darius was relieved Daniel survived, but then obviously missed the point sentencing Daniel’s accusers to death along with their families. He then commanded all of his subjects to recognize Daniel’s God as ruler of all. Well, all except Darius. Darius required submission from everyone except himself.

In some ways I can relate with King Darius. I’m pretty good at recognizing what OTHER PEOPLE should be doing. I’m not always as sharp recognizing such things in myself. This is one reason why we all need community to grow in faith. Christianity is not a do-it-yourself project. We need people who love us enough to both encourage and challenge us.

Who are the people you’ve given permission to challenge you? I’m asking myself that questions today.