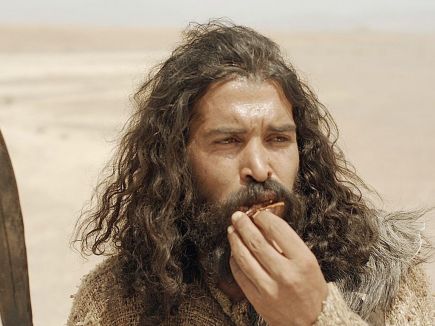 Matthew 3:4 Now John wore clothing of camel’s hair with a leather belt around his waist, and his food was locusts and wild honey. 5 Then the people of Jerusalem and all Judea were going out to him, and all the region along the Jordan, 6 and they were baptized by him in the river Jordan, confessing their sins. 7 But when he saw many Pharisees and Sadducees coming for baptism, he said to them, “You brood of vipers! Who warned you to flee from the wrath to come? 8 Bear fruit worthy of repentance. 9 Do not presume to say to yourselves, ‘We have Abraham as our ancestor’; for I tell you, God is able from these stones to raise up children to Abraham. 10 Even now the ax is lying at the root of the trees; every tree therefore that does not bear good fruit is cut down and thrown into the fire.

John the Baptist was a strange bird indeed. He dressed funny, ate an unusual diet, but had a very clear message of repentance. Many people responded to him, even “many Pharisees and Sadducees”. They were among the appropriately sanctioned spiritual leaders where John was not. These two factions (Pharisees and Sadducees) were at odds with Jesus for most of his ministry.

The translation of the bible I’m reading (the NRSV) says that the Pharisees and Sadducees came to John “for baptism”, implying they too wanted to be baptized. If that’s so, John’s response to them seems overly harsh “You brood of vipers!”. However, several other translations say something like “(they) came to the place where John was baptizing”. In other words, they just wanted to see what all the fuss was about, not necessarily to participate. Frankly, this second translation makes more sense. It explains John’s response and sets the stage for the ongoing antagonism when Jesus emerges.

Some would say I’m among the officially sanctioned religious leaders of my community as an ordained pastor serving a local church. I know that the world around us is changing and the church is often slow to respond. We get set in our ways and do things “the way we’ve always done” – but that doesn’t serve us well. More importantly, it doesn’t serve the gospel well.

I wonder who the John the Baptist sorts might be in our day. Who are the people calling us out of our comfort into an unknown future? Will we participate in God’s renewing of the church or will we sit out and watch from a safe distance? These are the kinds of questions going through my mind this morning.

Lord Jesus, there are prophets in every age calling us to repentance. Give us ears to hear and grace to take action. We pray this in Jesus’ name. Amen.