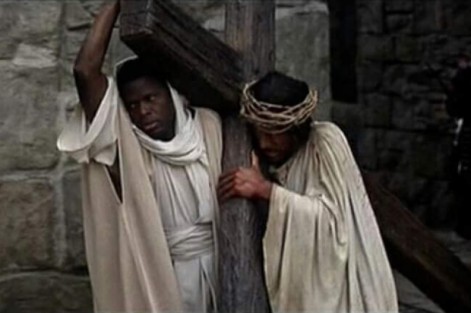 Mark 15:21 They compelled a passer-by, who was coming in from the country, to carry his cross; it was Simon of Cyrene, the father of Alexander and Rufus. 22 Then they brought Jesus to the place called Golgotha (which means the place of a skull). 23 And they offered him wine mixed with myrrh; but he did not take it. 24 And they crucified him, and divided his clothes among them, casting lots to decide what each should take. 25 It was nine o’clock in the morning when they crucified him.

There have been some interesting interpretations of scripture over the centuries that have tried to reconcile the embarrassment of the crucifixion of Jesus. I mean, how could God possibly allow his own son to be put to death? By crucifixion no less?

One particular heresy (according to one of my bible resources) was proposed by a guy named Basilides in the second century. There’s an interesting grammatical feature in the gospel of Mark in which Jesus’ proper name is not used in Mark chapter 15 between verses 15-34. In the English bible Jesus’ name appears, but the original Greek only uses male pronouns. Sooooo, Basilides suggested it was Simon of Cyrene who was actually crucified, not Jesus himself. I think I get the impulse to offer another interpretation.

It’s much easier for us, 21 centuries later, to believe Jesus was indeed the son of God AND was crucified, but this would have been a tough sell in the ancient world. People would be reluctant to get on-board with this narrative. I mean, if God can’t protect his own son, how would be protect me? No thanks.

But, it’s true. Jesus, the son of God, died. And then rose. Jesus took the penalty for our sins with him to the grave, then defeated death and the grave forever in his resurrection. There was no other way and I thank God for it. It’s as Paul wrote many centuries ago:

1 Corinthians 1:22 For Jews demand signs and Greeks desire wisdom, 23 but we proclaim Christ crucified, a stumbling block to Jews and foolishness to Gentiles, 24 but to those who are the called, both Jews and Greeks, Christ the power of God and the wisdom of God.

Gracious God, your wisdom is beyond human comprehension. You never fail to surprise, to confound. Give us grace to embrace the truths of the scriptures, especially when a different truth would be more palatable. We pray this in Jesus’ name. Amen.