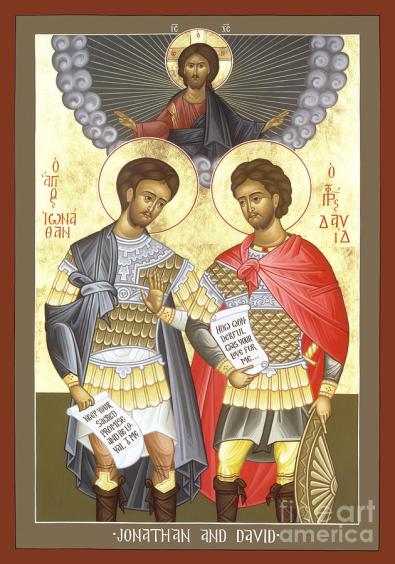 1 Samuel 18:1 When David had finished speaking to Saul, the soul of Jonathan was bound to the soul of David, and Jonathan loved him as his own soul. 2 Saul took him that day and would not let him return to his father’s house. 3 Then Jonathan made a covenant with David, because he loved him as his own soul. 4 Jonathan stripped himself of the robe that he was wearing, and gave it to David, and his armor, and even his sword and his bow and his belt. 5 David went out and was successful wherever Saul sent him; as a result, Saul set him over the army. And all the people, even the servants of Saul, approved.

King Saul was jealous of his servant David’s success and vowed to kill him. But Saul’s son Jonathan advocated for David and, as we shall read later in this book of the bible, saved David on multiple occasions. This is remarkable because one would expect David to be a rival to Jonathan, not a dear friend. After all, as the son of a sitting king Jonathan would have likely spent his entire young life preparing to be king. Learning about governance and politics. Learning about warfare and leadership. Learning about worship of Yahweh, the role of prophets in discerning the will of God, and so on.

But then his father Saul lost the favor of God and the kingdom was being given to David.

Jonathan recognized that David had the favor of God upon him, so he made a covenant with David to protect him. He even went so far as to give David his royal robe, armor, and weapon to serve as a visible reminder that David was to be Saul’s successor, not himself. I’m guessing his father Saul was not happy about this. Nevertheless, Jonathan displayed a strength of character and humility I find remarkable. In a preview of what was to come between John the Baptist and Jesus, Jonathan knew that he must decrease so that David might increase.

I wonder if in private moments Jonathan grieved for the life he expected to live, but did not. It would have been perfectly natural for him to do so, because seeing one’s hopes and expectations dashed is painful and difficult – even if it comes at the hand of God. I expect, at some level, this happens to all of us. I’m getting to the age where I realize some of the dreams I had for my life may never come true. Things haven’t all worked out as I’d expected. I have experienced disappointment and heartbreak in some areas.

And so today I am inspired by Jonathan. Lord, give me grace to surrender to your will with the vigor and faith I see reflected in this remarkable young man. Amen.