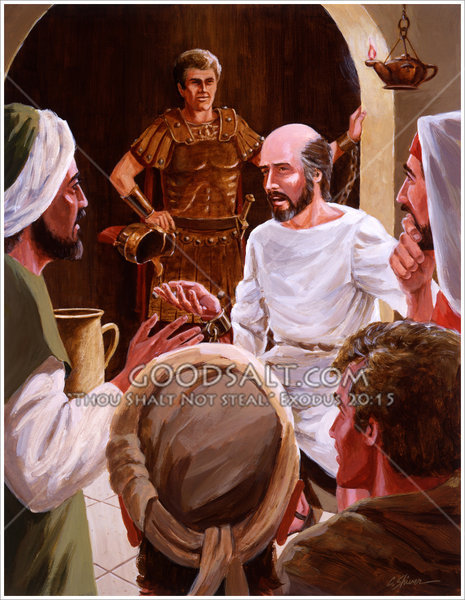 Acts 26:24 While (Paul) was making this defense (and preaching the gospel while doing so), Festus exclaimed, “You are out of your mind, Paul! Too much learning is driving you insane!” 25 But Paul said, “I am not out of my mind, most excellent Festus, but I am speaking the sober truth. 26 Indeed the king knows about these things, and to him I speak freely; for I am certain that none of these things has escaped his notice, for this was not done in a corner. 27 King Agrippa, do you believe the prophets? I know that you believe.” 28 Agrippa said to Paul, “Are you so quickly persuading me to become a Christian?” 29 Paul replied, “Whether quickly or not, I pray to God that not only you but also all who are listening to me today might become such as I am—except for these chains.”

Paul is coming to the end of his life. He has been through great suffering and persecution over the years. He’s been imprisoned, beaten, stoned (with rocks), jailed, shipwrecked, left for dead. By the time of our passage this had been going on for decades. Paul would have been a physical wreck; limping, bent over, scarred from head to toe. And yet he remains bold in his proclamation of the gospel, even to King Agrippa.

Why? Why, after so much suffering, would Paul persist in preaching the gospel at risk of life and limb?

Paul believed the Lord had called him to visit Rome and to share the gospel with the emperor there. So Paul is determined to stay the course until he has the chance to do so. And I’m pretty sure if you’d have asked Paul he would have told you that, if he could only reach the emperor, the Lord would do the rest – would open the emperor’s heart to receive the gospel of Jesus Christ and become a Christian believer.

And if the emperor were to become Christian, perhaps the entire Roman empire would follow! Wow! Imagine that!

But it wasn’t to be. Paul did eventually speak to the Emperor Nero, but no conversion took place. That said, Paul was acquitted of the charges against him and freed. Later he was again taken prisoner and, according to tradition, is beheaded in 68 A.D. in Rome. The event is not recorded in scripture, but in the writings of some ancient historians.

In one sense Paul never lived to see his ultimate dream of an emperor’s conversion, which must have been disappointing. On the other hand, the Roman Emperor Constantine would become a Christian some 300 years later and create the so-called “Holy Roman Empire”. In a few short centuries most of the Western world, 100s of millions of people, would become Christians – in no small part due to the sacrifice and determination of a feeble, broken man named Paul.

Lord Jesus, I’m no apostle Paul. You know that very well. But I want to be brave like Paul, even a little bit. I want to give my life for the sake of the world-changing gospel of salvation. Give me courage to speak when give the chance, trusting your grace to meet me in that space. Amen.