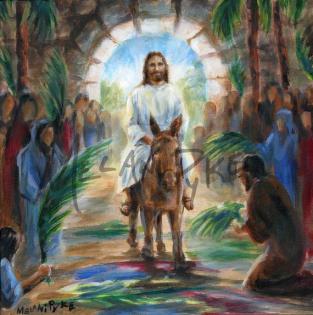 Mark 11:7 Then they brought the colt to Jesus and threw their cloaks on it; and he sat on it. 8 Many people spread their cloaks on the road, and others spread leafy branches that they had cut in the fields. 9 Then those who went ahead and those who followed were shouting, “Hosanna! Blessed is the one who comes in the name of the Lord! 10 Blessed is the coming kingdom of our ancestor David! Hosanna in the highest heaven!” 11 Then he entered Jerusalem and went into the temple; and when he had looked around at everything, as it was already late, he went out to Bethany with the twelve.

Here we have Jesus entering the city of Jerusalem a few days before he is betrayed by Judas. V.9 gets my attention this morning, “Blessed is the coming kingdom of our ancestor David!” It’s obvious the people of Jerusalem have high expectations of Jesus. Finally – a new Jewish king! The days of Roman rule are numbered! And then Jesus is arrested.

Talk about a let-down.

So the people turn on Jesus and within a few days are crying out “Crucify him!”. It’s a brutal turn of sentiment, but I understand it. Disappointment of that magnitude can bring out the worst in people. In me. In you.

There’s a lot of disappointment happening right now, of course. Wedding plans, graduation plans, vacation plans… altered or dashed altogether. Jobs lost. Businesses closing for good. Estrangement from friends and loved ones. The list is long. And so it’s in times like this we need to ask the Lord to give us patience with one another, for trust that the Lord will see us through, for a bit of hope when so much of the news is bad news.

Lord let it be so. Amen.

One thought on “Hope! And let-down…”